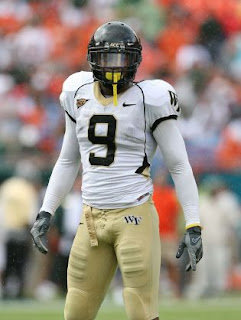 Played both safety positions in a Wake Forest defense that was star studded, including fourth overall pick LB Aaron Curry and CB Alphonso Smith. Far better in run support and in that purpose, he is excellent. Looks to compete with Roman Harper at strong safety and at the least, play special teams. Prepped as a receiver and has those skills as a ball hawk, but his speed and recognition are not on par with a starting safety. For what it means in Gregg Williams' system, Vaughn will apparently start out at free safety behind Darren Sharper, Pierson Prioleau, and Usama Young. Ran significantly faster 4.36 at the combine.