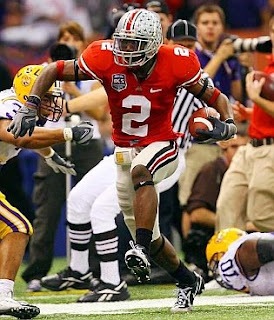 Jenkins started games in all four years at Ohio State, coming out of Piscataway, New Jersey where he was a state champion in the 400m dash and played both offense and defense. Started 39 straight games after his freshman year. Jim Thorpe award winner as a senior for the nation's best defensive back. First defensive back taken in the draft. Had a non-season ending knee sprain as a freshman that forced him out of two games and hasn't missed a game since. Blistering 6.59 in the three-cone drill.

Not a great fit at cornerback for a team with lots of press, man coverage so in New Orleans because of his lack of elite straight-line speed, he may end up as a starting free safety instead of a cornerback. Nevertheless he has good quickness and speed and is an experienced college player with a ton of playing time under his best at a high level of competition.He has the size, willingness to support the run and trackling skills to play safety. He rotated between cornerback and safety at times for the Buckeyes so he has experience there. A solid character, team-captain type with great intangibles who plays with emotion.

NOPF predicted the Saints to select Jenkins in every mock draft, but some mystery remains for Jenkins' future: what position will he play? Initially, the Saints have said they will play him at cornerback, but it is an inevitability that he be tried at safety sooner than later.

"I really don’t have a preference," Jenkins said about his position. "I can see myself playing corner, being a dominant corner and having a lot of success. I also can see myself doing the same thing at safety. I just want to find a home at a position and start getting better at it, so I can contribute as much as possible."

Did you know? Recent defensive backs from Ohio State taken in the first round have a high success rate: Bills S Donte Whitner, Panthers CB Chris Gamble, 49ers CB Nate Clements are the last three and all are solid contributors to their teams.