February 2013 is going to be a big month for the city of New Orleans. The Super Bowl, awarded on Tuesday to the city, will occur during Mardi Gras. 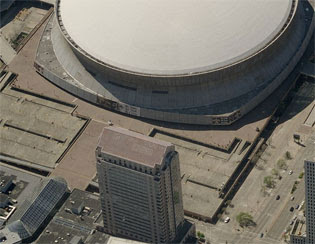 The City of New Orleans has been awarded Super Bowl XLVII, it was announced today by New Orleans Saints Owner Tom Benson. After exhaustive efforts by Benson, the Saints organization, the Greater New Orleans Sports Foundation and other officials, Benson’s fellow NFL owners voted that the city will host the league’s championship game in 2013.

Mr. Benson has led the bid to secure the game for his hometown. He enters his 25th season as Saints owner in 2009, and this is the fifth Super Bowl he has landed for New Orleans. NFL Owners selected the city after also receiving bids from South Florida and Phoenix.

“This is a great accomplishment for New Orleans, and the significance of bringing the Super Bowl to our city and region can’t be overstated,” said Mr. Benson. “From every perspective, this shows that our city is on the rise, viable and thriving, and I have great faith in what we can accomplish and the impact it will have, starting today. This is my hometown, and maybe we don’t need to talk about New Orleans being on the way back anymore. New Orleans is back, and today is proof.”

The economic impact of Super Bowls for the host city is estimated at well over $300 million annually, a tremendous windfall for the tourism-based economy of New Orleans. What can’t be quantified is the importance of the media coverage globally leading up to the contest. Compelling shots from around the city and other Louisiana landmarks will be a constant during the week, as New Orleans will become the capitol of the sports world.

“New Orleans provides an atmosphere that creates fantastic memories, and there is nothing like a Super Bowl to give a city the opportunity to show the world what it is capable of,” said Saints Owner/Executive Vice President Rita Benson LeBlanc. “The NFL loves to come to our city for Super Bowls. And just by the way we entertain the world, there is a tremendous trickle-down effect economically – to our hotels, our restaurants, our vendors, all businesses. We will all benefit from today’s announcement.”

"This is a huge win for New Orleans, but also the entire state of Louisiana. There’s no doubt that the spirit of our people who persevered through four storms in just over three years played a critical role in securing the Super Bowl,” said Louisiana Governor Bobby Jindal. "This win shows that New Orleans is a premier host for major sports and entertainment events – and will be a perfect backdrop when the eyes of the world are upon us. Indeed, Louisiana is committed to making sure the 2013 Super Bowl is unparalleled. That’s why it was critical for the state to come together with the New Orleans Saints and the Louisiana Superdome to establish a long-term agreement that will save taxpayers money, significantly improve the playing venue and dramatically revitalize the stadium area and the surrounding neighborhood."

Mr. Benson also saluted the work of the Greater New Orleans Sports Foundation, who worked in conjunction with the Saints in every aspect of creating and presenting the bid for Super Bowl XLVII. Wooden boxes built from cypress were sent to each NFL owner, each uniquely decorated for that club by young local artists. The bid also outlined planned improvements to the Superdome that were announced recently, with the stadium being enhanced and Mr. Benson purchasing two adjacent properties and restoring them to create a new Sports Development District downtown. The plan further spurs economic development in the region.

“I want to congratulate Jay Cicero and his staff at the Greater New Orleans Sports Foundation for their tireless efforts and recognize the energy they put into making this a reality,” said Mr. Benson. “When a city is awarded a Super Bowl, it takes a lot of separate entities working with the NFL club to bring the pieces together. This is a day that we should celebrate, and a day that we can all be proud of." Super Bowl XLVII will mark the 10th Super Bowl hosted by New Orleans, which would tie the city with South Florida as the most popular site (including the upcoming 2010 Super Bowl at Dolphin Stadium). The 2013 Super Bowl would be the seventh at the Louisiana Superdome. The three other championship games in New Orleans were played in Tulane Stadium in 1970, 1972 and 1975.

“New Orleans and the Super Bowl are synonymous,” said Sports Foundation President/CEO Jay Cicero. “We are proud to have spearheaded the bid effort with the Saints. We look forward to serving the State and City as the New Orleans Host Committee Staff for the 2013 Super Bowl. The Super Bowl is the preeminent event to host and it will put New Orleans on the forefront of peoples’ minds for years to come."