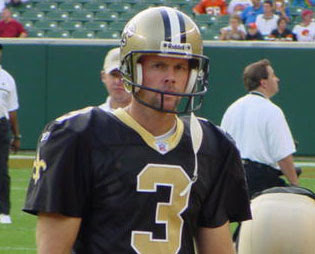 Instead, the Saints have brought back former Haslett-era placekicker John Carney, 44 years old, in response to placekicker Garrett Hartley struggling with his new placeholders, including missing a 20-yard field goal Friday night.

Hartley did respond later in the game with 54-yard field goal, and together with his perfect 13-for-13 performance in 2008, his roster spot is far from lost.

Carney is coming off a resurgent 2008 season when he made the Pro Bowl after hitting 35 of 38 field goals for the Giants last year.

Both Hartley and Carney will need to work hard with the Saints' holders, backup quarterbacks Mark Brunell and Joey Harrington.

It was Sean Payton and Mickey Loomis who three years ago decided Carney was done. They traded for Olindo Mare from the Dolphins and sent Carney packing after six seasons in New Orleans.

Mare turned out to be a disaster, and last year the Saints had multiple comings and goings at both kicker and punter, including spending a draft pick on a kicker who never panned out.

UPDATE: Breaking news is that kicker Garrett Hartley has been suspended for four games by the league. Reason is unreleased so far, and an appeal is still possible. Its not very likely that Carney will be the Saints' kicker in 2009.

UPDATE 2: Hartley has been suspended and will serve four games for taking Adderall, a stimulant drug used to treat Attention Deficit Hyperactivity Disorder, but Hartley admitted he borrowed it from a friend to stay away for a long road trip to New Orleans during the offseason.
at 8/15/2009 06:32:00 PM