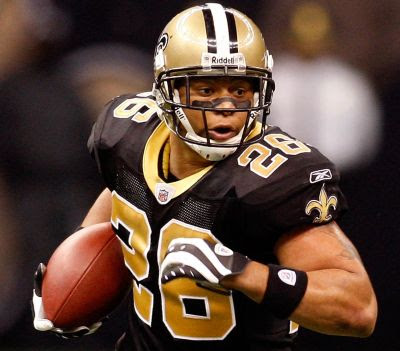 Just in time for the playoffs, the Saints have reportedly re-signed free agent RB Deuce McAllister.

McAllister, 31, last played in an NFL game on December 28, 2008 and was released in February of 2009. Suffering major injuries in both knees during his career, McAllister had minor knee surgery after the 2008 season.

Clearly in need of insurance at the position, McAllister arrives on a depth chart that features starter Pierre Thomas, who will play with fractured ribs, Mike Bell who has only 28 rushing yards in the past four games, and mercurial Reggie Bush in a "specialist" position. McAllister could conceivably get carries should Thomas' injury keep him out. Otherwise, his game action would be token at best.

Regardless, McAllister was a key force in the Saints' last playoff win, when he rushed for 143 yards, caught passes for 20 yards and scored twice on January 13, 2007 in the Saints' divisional playoff victory over the Eagles. His presence is an inspiring positive influence in the locker room and in the Superdome, where his jersey is still widely worn.

Since that playoff game in 2006, McAllister has only 528 rushing yards in 10 games, including a major knee injury in 2007. He did score six touchdowns in 2008 but his yard/carry average was 3.9, under four yards per carry in a full season for the first time in his career.

McAllister is one of three Saints players current pending a four-game suspension in the Starcaps case.

He is set to practice with the Saints once before tomorrow's game. It is assumed he will be on the active roster.

UPDATE: To make room for McAllister on the 53-man roster, the Saints placed DT Rodney Leisle, himself in his second tour of duty with the Saints, on injured reserve. Leisle suffered a knee injury this week in practices, which were described as "training camp like".

UPDATE: Drew Brees wrote via Twitter: "A lot of news to announce...my son's 1st birthday today, Blackout the Dome on Saturday, and Deuce is back! Deeeeeeuuuuuuuuuuuuuuccccccceeee"
at 1/15/2010 11:26:00 AM